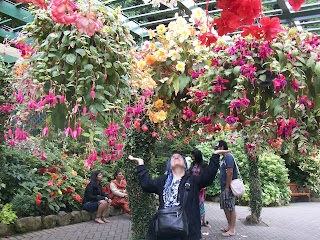 Continuing escapades as the Trugmans roam through the beautiful northwest country. We spent a beautiful Shabbat at sea. Somehow among 3,000 people aboard us 150 Yidden were able to pull off a peaceful, calm Shabbat. Davening was replete with singing, dancing, learning and of course kosher feasting... We disembarked in Victoria, British Columbia on Saturday night and bid farewell to a whole group of new friends whom with we shared the beauty of Alaska and God's handiwork. In Victoria we were hosted by a wonderful family who directed us towards the highlights of this absolutely charming city on Vancouver Island. We saw deer roaming freely in the city, went to the world famous Butchard Gardens where we marveled at the most gorgeous gardens, and visited the oldest China Town in Canada. But most important was our teaching at Chabad where people were wide open to hearing about the Mystical Power of Music. Many people who rarely come to synagogue filled the Chabad center. 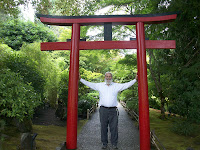 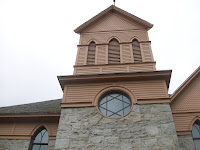 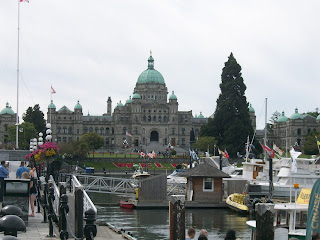 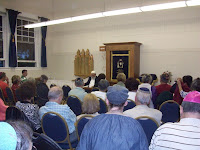 The next day we took the ferry to Vancouver, a bustling city surrounded by water everywhere and majestic mountains. Once again we presented the Mystical Power of Music through Chabad. This time to a group of young professionals, including a nice number of Israelis. My appreciation and awe for Chabad has grown tremendously these last few years as we continue to work with Chabad literally all over the world. The absolute love, commitment and meseirut nefesh of the Chabad shluchim is a shining example of everything good and wholesome and genuine about Torah. We began the evening by blowing shofar and explored with them the powerful energy of music from the atom to the galaxies, from the mind to the heart.

Next stop Chicago and big Shabbaton in South Bend. Indiana!
Posted by TheTrugmans at 10:06 PM No comments:

How great are your works Hashem! 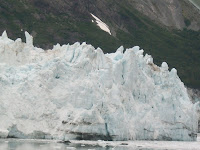 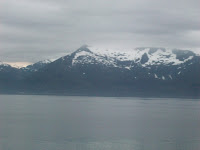 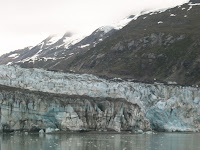 Every morning we recite the following - "How great are your works Hashem, You have crafted them all with wisdom." The last week during our cruise to Alaska these words took on added meaning as we were privileged to see the grandeur of Alaska and Canada. There were so many highlights I will mention just a few of them. We saw a good number of glaciers, many from very close. Of course we were seeing only the end tip of them, some which stretched for 1,500 miles. To our amazement they had a beautiful blue tint, were mammoth and are constantly moving. For the first time I learned how much of the earths present geological makeup was formed by glaciers cutting themselves through mountains and forming the valleys and lakes around the world. These ice monoliths were truly awe inspiring. The mountains were majestic everywhere we looked and hundreds were still full of snow. 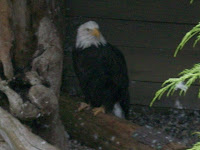 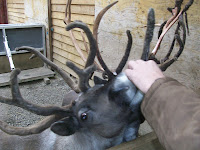 We saw pods of wales, a brown bear catching salmon, salmon running up stream by the thousands, a bald eagle, a spotted owl, and sea otters. We heard personal accounts of people who lived in small Alaskan towns like 'Juno, Skagway and Katchakan and contemplated life in a very far away place. In all these places the sun rarely shines and constant mist, clouds and rain form their reality. I was so happy when the sun finally came out as we approached Victoria, British Columbia where we disembarked for our next series of teachings. 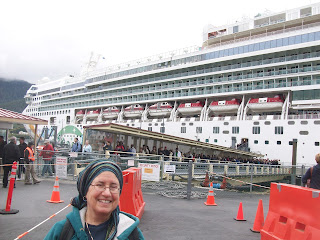 While on board we had 3 minyans a day, daily teaching and an overabundance of great glatt kosher food.I lead Carlebach davening on Shabbat and in a very short time we befriended a whole lot of very, very, nice people. Although there were over 2,000 people on this mammoth floating hotel we were able with the cooperation of the boat line to live a normal Jewish life.

There is so much more to tell but we will let the pictures tell their story.

We are now in Victoria and will send more blog posts on the last leg of our trip. 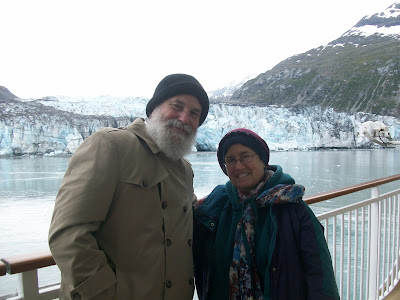 The trip so far is an amazing combination of viewing the wonders of the natural world and praising Hashem for the glorious creation and deep connections with the wonderful people who have been hosting and attending our teachings and Shabbat experience. Today as we were sailing at 25 knots out at sea after leaving Seattle we were in the lobby where they were playing a "name that tune game". We correctly identified Bob Dylan's - the answer my friend in blowin' in the wind" when I spotted a whale spout and then a fluke (whale tails) up in the air above the rippling silver ocean waves and then more spouts until there were 40-50 flukes dancing in the air. All the people in the lobby ran to the windows to ooh and aah, us included.
More to come soon!
Posted by TheTrugmans at 9:47 AM 1 comment:

Modern Times and the Crises in Relationships

In a recent discussion with my good friend George Gumbiner he pointed out a certain crises in relationships and self identity that seems to exist in society and in so many areas of our lives. This ambivalence manifests in many ways: in the growing confusion surrounding sexual identity, the weakening of family ties, the distrust in big government and organized religion and in the soaring divorce rates. In the Jewish world this is further seen in the high intermarriage rates and the disconnect that so many Jews have with their Jewish roots and their connection to the State and land of Israel.

Thinking of these ideas surrounding the present state of affairs seems very appropriate for this time of year as we are about to enter the month of Elul and the holidays of Tishrei - Rosh Hashana, Yom Kippur, Succot and Simchat Torah. As is well known the acronym of the Hebrew words ani l'dodi v'dodi li (I am to my beloved and my beloved is to me) spell the word Elul.
Although we are entering into a period of deep introspection and judgment we should always remember that it is the context of the love relationship between man and God. In other words the key to Elul is a yearly review of our own relationships: to God, to family and friends, to our commitment to Jewish life and Israel as well as our relationship to the earth on which we live and the greater society that surrounds us. On a deeper level this review demands of us to probe the relationship of our inner selves and our outer persona, and the correspondence between our dreams and goals and the reality of our lives.

It seems to me that the crises in relationships are directly connected on some level to the amazing technological advances of the last hundred years. Although these advances have brought great progress and blessing to mankind they have also brought ecological disaster and exaggerated expectations of what society owes us and the place of the individual in the bigger scheme of things. Now-a-days if we have to wait an extra second for a computer response, a fax to be sent, a phone call to go through, or an extra minute for an international flight to arrive we are up in arms. We all have hundreds of friends on Facebook but no one to really talk to when the chips are down. So many people are connected to the whole world in cyber space but feel more distance between themselves and others than ever. Our idea of relationships is too often what is in it for me and not the true give and take involved in a real relationship. More and more people are putting off marriage to build a career and see the world and then, when they are finally ready to make a commitment, they find they might have missed the boat.

So here comes Elul and a new opportunity to look at ourselves in the mirror, to examine our direction in life and where we are coming from and even more important, where we are going. A new year is coming and we all have opportunity to work on our relationships in all their manifold expressions and to renew ourselves once again.
Posted by TheTrugmans at 6:47 PM No comments:

According to tradition, one can begin to greet others with L'Shana Tova (Have a good year) from Tu B'Av (the 15th day of Av). In as much as I am writing this on Tu B'Av I want to bless everyone already with a year of good health, spiritual growth, deep Torah learning, the highest Shabbeses, livelihood, peace in the home, peace in our hearts and peace in the world.

According to Chassidut and Kabbalah the fact that Tu B'Av is 45 days before Rosh Hashana is very significant and is connected to the Talmudic debate over which month the world was created in: Tishrei, the month in which Rosh Hashanah, the New Year of years falls, or Nisan, the month in which Pesach falls and which is the New Year of the months (Rosh Hashanah 11a). Both sides make numerous arguments, but the Talmud reaches no definitive conclusion. Rabbeinu Tam, a later commentator, explained the underlying unity of both opinions: the world was created in potential or in thought in Tishrei and in actuality in Nisan.

The word for "thought" in Hebrew is machshava. When those letters are permuted the spell choshav-mah, "to think of mah [the essence of a matter]" Mah = 45; thus one can read this allegorically as: God began to think of creating the world 45 days before Rosh Hashana!!

What this tells us is that we too should already begin the process of thinking about the essence of our lives and how we can be better, stronger, deeper.

L'Shana Tova!!!
Posted by TheTrugmans at 2:00 AM No comments: