Posted by TheTrugmans at 4:22 PM No comments:

Chanukah and the State of Israel

A question is often asked regarding the miracle of the Chanukah lights - why didn’t they wait the short time required till they could prepare pure oil for the menorah, rather than rushing to dedicate the when there was only enough oil for one day. A similar question is why did Mattitiyahu launch the revolt against the Greeks in such a spontaneous manner, rather than first organizing his agenda and supporters.
The answer to both questions are similar. Sometimes in life situations occur in such a way that only by acting immediately can one take advantage of the window of opportunity presenting itself in the present moment. In order to do this, one must divest himself of his own ego and previously perceived notions, and be totally open to the message God is sending through the situation. The more one nullifies the ego, the more clear the message comes through, giving wisdom and strength to act decisively in the moment, and thereby manifesting the full potential of God’s will. This is the intent of the statement of the Sages: “Treat His will as if it were your own will, so that He will treat your will as if it were His will. Nullify your will before His will, so that He will nullify the will of others before your will” (Pirkei Avot 2.4).
A similar situation to the above examples at the time of Chanukah occurred a few years after World War II. As pressure increased in the world for a solution  for the Jewish refugees from the Holocaust, the United Nations in 1947 voted in favor of the partition plan, creating both Jewish and Arab states in . Despite this vote, anarchy and war continued unabated up to the date mandated for the plan to be implemented. As a result, strong forces were gathering momentum to postpone or rescind  the decision. Even among the Jews of Palestine and in the Diaspora great confusion, uncertainty and fear reigned.
At this critical moment in Jewish history, David Ben Gurion, with the full force of his convictions, pressed for an immediate declaration of the birth of the State of Israel, despite the great odds pitted against its survival. He felt that if the present moment was postponed or squandered it may never come again. With little preparation and with no clear answers as to what would be the consequences of such a declaration, the fledging State of Israel was born.
When celebrating Chanukah and lighting the lights it is important, even critical, to understand the relevance of the holiday for us today, to see how the cycles of Jewish history  not only repeat themselves, but afford us the opportunity to integrate, rectify and uplift the eternal spiritual and practical messages our holidays impart to us. In this way the words of the blessing: “…who did miracles for our fathers, in those days, in these times,”  is understood in Chassidic thought  to mean not just “in these times” - signifying this time of the year - but “in these times,” meaning our very time - right NOW!
May we gain strength and clarity to grasp those special moments God gives us as individuals and as a people, in order to bring light to our souls, our homes, to all the Jewish people and the whole world.
Posted by TheTrugmans at 11:54 PM No comments:

Posted by TheTrugmans at 8:33 PM No comments: 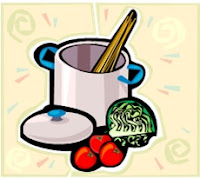 My Russian Grandma Ida knew about cold weather. So when the winds howled off Lake Michigan she cooked up this warming ultimate comfort food. You start any Jewish food with sautéed onions, and now we scientifically know why. A recent study of nursing home residents showed statistically that appetite increased when the aroma of fried onions wafted through the air before dinner time!  While those marvelously pungent onions are gently browning in 2 Tablespoons olive oil throw in 3 cloves of chopped garlic, 3 nice slices of fresh ginger, 3 sliced carrots, 5 stalks chopped celery, 1 medium head of chopped green cabbage ¼ head purple cabbage, 2 diced beets ½ a diced green bell pepper. Continue to sauté until everything is cheerfully sizzling then add a large can of crushed tomatoes and fill the pot with water just to cover the veggies. Add to the simmering pot 3 Tablespoons each of brown sugar and apple cider vinegar, then sprinkle in some salt, pepper & cayenne to taste. The cayenne and ginger will warm you down to your toes and chase away any audacious diseases who would dare to enter your spheres. As we Jewish (grand) mothers say in Yiddish, “Ess mine kindt” – “eat up my children.”

To your health and warmth, with LOL Lots of Love
Posted by TheTrugmans at 9:42 PM No comments:

Posted by TheTrugmans at 12:42 AM No comments: