Now this one is for all our readers residing outside of Israel. It's now just a few minutes before candle lighting time, so Israeli's won't get the chance to make this. 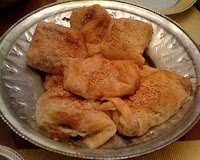 Börek (also burek and other variants i.e., bourekas) is a family of baked or fried filled pastries made of a thin flaky dough known as yufka (or phyllo). It can be filled with cheese, often feta, sirene or kaşar; minced meat, or vegetables. Most probably invented in what is now Modern Turkey, in theAnatolian Provinces of the Ottoman Empire in its early era, to become a popular element of Ottoman cuisine. A börek may be prepared in a large pan and cut into portions after baking, or as individual pastries. The top of the börek is often sprinkled with sesame seeds. Börek is also very popular in the cuisines of the former Ottoman Empire, especially in North Africa and throughout the Balkans.

It seems almost oxymoronic to eat bourekas, the ultimate flakey crumb producing food on Pesach. Here is a recipe that I learned not from a cookbook but by watching a former IDF chef in action. Omer had a virtual military operation going in my neighbors the Frumin’s kitchen today. The occasion was the engagement party of Chemla Frumin and her Chatan - Natan whose parents and brother came down from Carmiel to meet the extended moshav family.

Warning! This recipe requires soaked matzot which are broken in half hence the Yiddish term “gabrocks”. Some people avoid gabrocks like the plague (pun intended) to the extent of eating their matzo out of a paper bag like a wino (some use plastic bags), to avoid any drop of liquid falling on the hand baked delicacy.

The wet halves of matzo are placed in a plastic bag to make them pliable and when softened are rolled around a filling such as mashed potatoes, crumbled salty cheese or sautéed meat or vegetables. The possible fillings are practically limitless and where you can get really gourmet style imaginative.  Then the rolls are dipped in beaten egg and fried in hot oil till brown. Who would have imagined but they were really good and crispy and only half as crumbly as the year round variety. Unless you are Sefardic you won’t be sprinkling sesame seeds on these Turkish delights but you won’t be missing anything, the crunchy taste comes right through to the taste buds.

Posted by TheTrugmans at 6:46 PM